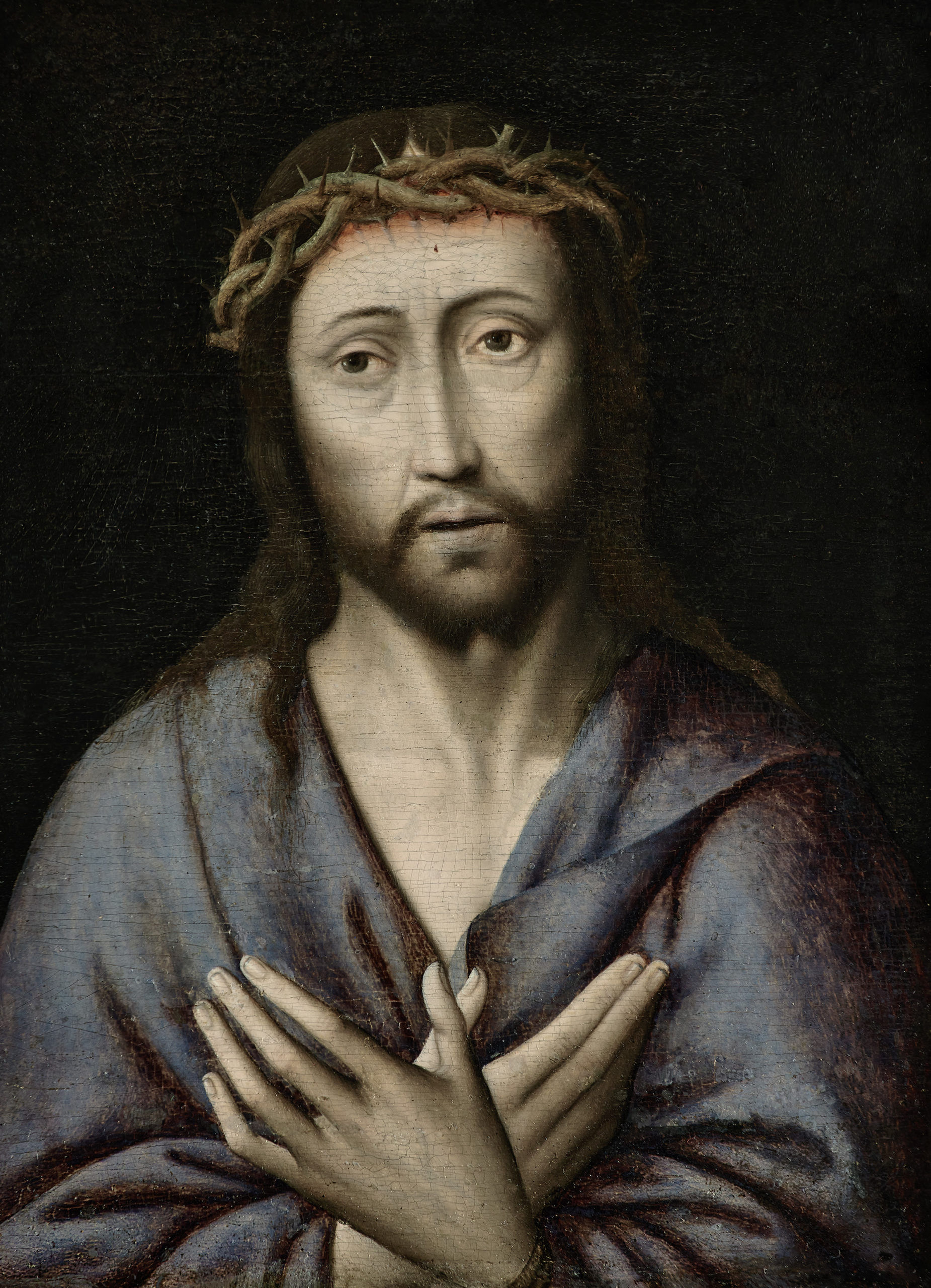 During the 15th and 16th centuries, the high demand for objects of private worship led artists to mass-produce diptychs, such as the one presented here. Its format, as well as the representations of the Virgin and Christ bound by emotion, emphasise the feeling of piety aroused by the depiction of the human drama of the Passion. This diptych is directly inspired by an original work painted by Dirk Bouts, now lost. He was at the head of a large studio where many of his students made works based on his prototypes. Among the subjects frequently painted in this studio were numerous diptychs representing Christ and Our Lady of Sorrows. A dozen or so copies stemming from an original version by Bouts are now kept at the Louvre (Fig.1), the National Gallery in London (Fig. 2 & 3) and the Art Institute of Chicago (Fig.4).

Christ is depicted here as the Man of Sorrows: painted half length and dressed in a simple grey garment, he displays the wounds of his Passion. This frontal depiction of Christ is typical of Byzantine art and featured in another lost work, the Vera Icona by Jan van Eyck. The art of Dirk Bouts lies between that of van Eyck and Rogier van der Weyden, who introduced the expression of human feeling in painting. This work of private worship focuses on suffering and the Passion as told in the Scriptures, and represented here by the Crown of Thorns. The presence of Christ, whose physiognomy is similar to that painted by Dirk Bouts, especially in his Christ crowned with thorns (Fig.5), contrasts with the dark background. The most illustrious copies based on the master's model present Christ and the Virgin against a gold background, dotted with black paint. Here, the artist has chosen a more sober background that emphasises the humility of the subjects.

In the 15th century, diptychs for private worship usually portrayed the Holy Family or a saint accompanied by a portrait of the patron. Instead of following the tradition initiated by Rogier van der Weyden, from whom Bouts borrowed the morphology of the Madonna, the Virgin Mary and Christ are presented with their heads inclined towards one another. The artist adds an expression that conveys the emotions felt. There is an emotional bond between the two subjects, as the Virgin observes the suffering of her son. She herself is painted in Mater Dolorosa, one of the three iconographies known to represent the Virgin's grief. Her expression is one of sadness; her eyes bathed in tears, head bowed and hands in prayer bear the weight of mourning. Together, the two wings of this panel form a coherent and unique whole, inspired by a major work of the 15th century. Focusing on the portrayal of feelings, it bears witness to the uniqueness of Dirk Bouts – one of the best known Flemish primitives – and his studio.